Skip to the content
My son rolled his vehicle three times side-over-side—he walked away without a bump or scratch.

So, here is how our New Year’s Eve weekend played out. On Friday, 12/29 my nineteen-year old son Facetime-d me to show me his car. He was driving in Ames, Iowa. He slid and bumped a curb  in a residential area. He damaged the balljoint and upper arm on the front passenger side of his Impala. He called Roadside Assistance and towed the vehicle to his apartment complex as it was ten p.m. on a Friday night, in a town where he knew no service stations.
On Saturday, I made several calls and found Friday, 1/5 at ten a.m. was the earliest we could get his Impala fixed. His roommates were home for break—he stayed in Ames to work.

My twenty-three-year old was visiting us in Kansas City. As I write from home, I arranged for him to drive my Mustang for the week and allow my younger son to drive his Pilot for the week to work. I would share a vehicle with my spouse if I needed to run errands.

On Sunday, 12/31, New Year’s Eve at ten a.m., my oldest son drove his Pilot behind me in my Mustang from Kansas City, MO to Ames, Iowa to drop it off for my other son. In Des Moines, he slipped on ice, lost control, left the highway and rolled three times in the Honda Pilot. When he called me I circled back to pick him up.
A witness stated he rolled three times. My son said the side airbags deployed and he landed right-side up in cattails of I-80 near the I-35 exit. He climbed from the deep ravine up to the highway. As there was no shoulder at this area, the highway patrol escorted us to a parking lot to fill out paperwork.  Another patrolman came later, stated can’t see the wreck from the road and it took him a while to locate it in the tall cattails. Due to the weather, there was a towing ban on the interstates during this time.

So we turned back for KC. My son in Ames was left until Friday without a vehicle. We contacted our insurance agent from home. I opted to relax on New Year’s Day and call the towing company on Tuesday morning.
The towing company called back on Tuesday evening stating they couldn’t find his car. The HP stated it was red instead of burgundy. As there is no shoulder, it is very hard to see the Pilot in the cattails while driving by and it’s top looked black. So they went back Wednesday night after dark with the HP stopping traffic. It took two tow trucks to pull it out and up.
Looking at the photos of the Pilot, it seems a very safe vehicle in rollover accidents. We are very blessed that neither son was injured.
I have spent my entire week on the phone with towing companies, repair companies, insurance companies,…#writerprobs No work for me this week. 🙁 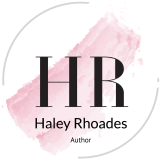 Haley Rhoades’ writing is another bucket-list item coming to fruition, just like meeting Stephen Tyler, Ozzie Smith and skydiving. As she continues to write romance and young adult books, she plans to complete her remaining bucket-list items, including ghost-hunting, storm-chasing, and bungee jumping. She is a Netflix-binging, Converse-wearing, avidly-reading, traveling geek.
A team player, Haley thrived as her spouse’s career moved the family of four 10 times to four states. One move occurred eleven days after my C-section. Now with two adult sons, Haley copes with her newly emptied nest by writing and spoiling Nala, our precious Pomsky. A fly on the wall might laugh as she talks aloud to her fur-baby all day long.
Haley’s under five-foot, fun-size stature houses a full-size attitude. Her uber-competitiveness in all things entertains, frustrates, and challenges family and friends. Not one to shy away from a dare, she faces the consequences of a lost bet no matter the humiliation. Her fierce loyalty extends from family, to friends, to sports teams.
Haley’s guilty pleasures are Lifetime and Hallmark movies. Her other loves include all things peanut butter, Kansas City Chiefs, St.Louis Cardinals, Star Wars, mathematics, and travel. Past day jobs vary tremendously from an elementary special-education para-professional, to a YMCA sports director, to a retail store accounting coordinator, and finally a high school mathematics teacher.
Haley resides with her husband and fur-baby in a south Des Moines suburb. This Missouri-born girl enjoys the diversity the Midwest offers.
Reach out on Facebook, Twitter, Instagram, or her website…she would love to connect with her readers.